The European bison, or wisent, is related to the American bison and a distant relative of our domestic cow. In comparison to our domestic cows they are slender build, have a high hump, short horns curved upwards and a rather solid, chestnut brown fur. In the shades of a full-grown forest they are difficult to discover. European bison are well adapted to life in a woody environment but do need grasslands and shrubberies to find a sufficient amount of food. Due to their rather slender build and short, inwards pointing horns, European bison are perfectly able to move through shrubberies and thick young forest patches. 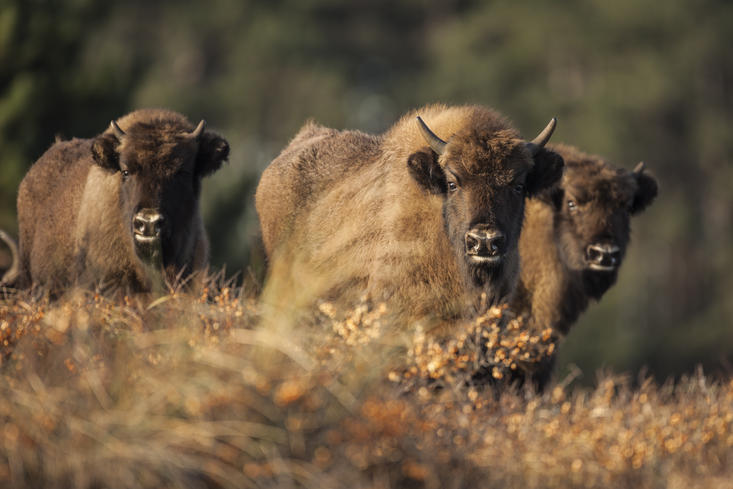 Research in Kraansvlak made clear that in a Dutch context bison are not quite the typical forest animals for which they are considered in previous literature. Perhaps because European bison had their last refuge in the Polish Bialowieza Primeval Forest, they are invariably associated with forests. In Kraansvlak they are primarily found in (half)open areas. They graze in open dune valleys, often take a sand bath in open areas and do not hesitate to walk into the dune lake.

In summer bison have a short, smooth summer coat. Towards winter hairs become longer and shaggier,and a fine underfur grows. In addition, a beard grows on throat, neck and chin, and more hair appears at the back of the head. The high back of the European bison is formed by lengthened bones of the thoracic vertebra. The cows have shorter, narrower and less stronger horns than the bulls. Wild living bulls in general weigh up to 840 kilograms and can reach 1.88 meters height. Wild living cows weigh up to 540 kilograms and can reach a height of 1.67 meters. With a length of nearly 3 metres, European bison are quite impressive and not without reason the largest land mammals of Europe!

The Bison Trail is a walking path within the bison area. The trail is now open.

Book an excursion to the Kraansvlak bison area near the Kennemer Dunes.