At a symposium about natural grazing in the 90s Hans van der Lans of Ecoplan Nature development and Leon Terlouw of PWN water supply company North-Holland met. Soon bison became the topic of their conversation. Hans liked to give this species a chance in a fenced, not publicly accessible nature area of a few hundred hectares.
In early 2003, a meeting took place between Hans van der Lans and Ruud Lardinois of Kritisch Bosbeheer and PWN (Piet Veel, Rienk Slings, Coen van Oosterom and Leon Terlouw) discussing possibilities to bring bison into a not publicly accessible part of Kraansvlak. In addition, a field visit took place to assess whether this would be a suitable habitat for bison. It was agreed to explore the possibility to bring bison to this area, and a document about this was written in Dutch: 'Wisenten in het Kraansvlak'.

A project team in which also Gerben Poortinga from Stichting Tarpan participated, continued to explore the possibilities and organized a workshop on the topic, followed by a field visit in April 2004. Hereafter communication started on a modest scale, support was sought for and several articles about the intention were published in the press. In Autumn, a first work visit was organized to a bison project in Damerower Werder, Germany, at which also people from the Staatsbosbeheer and Natuurmonumenten were present.

In 2005, the project expanded and became a collaborative project of Stichting Duinbehoud, Stichting Kritisch Bosbeheer, ARK Nature and PWN. Through this partnership, a new document 'Wisenten in Kraansvlak' was published so that subsidy could be requested for at various funding bodies. Besides PWN, the province of North Holland, VSB Fonds and ANO-fundatie were found willing to support the project with a financial contribution.
Areas in France, Germany and Sweden were visited to gain knowledge about bison. Meanwhile the Radboud University prepared a study looking into the effects on the fauna biodiversity, and the University of Groningen started a broad investigation into the ecology of the bison, in which also areas abroad are involved. 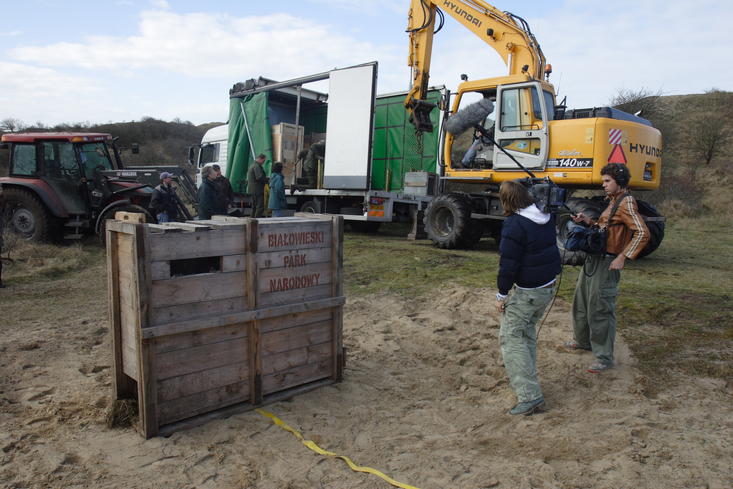 On April 24, 2007 the big day was there: the first three bison arrived in Kraansvlak and were released under the supervision of a select group of people. The research was immediately launched and to date there has been a world of knowledge gathered through the efforts of many students and accompanying foresters. The collars worn by the bison provide a wealth of information. On March 18, 2008 three more bison were released, completing the start group of the project. This time there was more press was present as well as a large group of guests. In October 2009 a small herd of Konik horses was released into Kraansvlak. Since then bison and Konik horses live side by side.