The first wisentlike animals appeared 2 to 3 million years ago in South and East Asia. Their successors colonized North-America, evolving into the American bison. An other branch colonized Europe and evolved into steppe wisent, who, together with mammoths and woolly rhinoceros, inhabited Europe during the Ice Ages. After the last Ice Age steppe wisent, mammoth and woolly rhinoceros disappeared. The current wisent, also called European bison, evolved from steppe wisent or a close relative. When the climate became warmer the wisent colonized large parts of Europe: from South-England to the depths of Russia and the Pyrenees, North-Italy and the Balkans to South-Sweden. Also at the bottom of the Dutch part of the North Sea wisent bones were found, dating from the transition period of the last Ice Age to the Holocene, the current geological era. 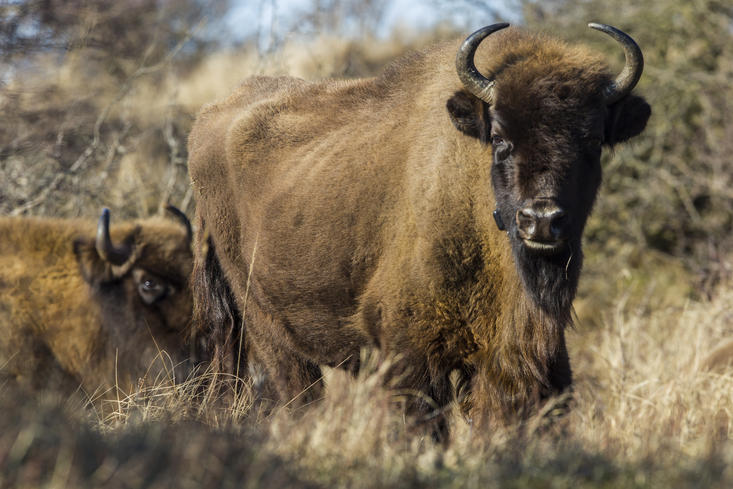 This situation continued almost unaffected until the year 400, but from then on the situation worsened. Just like other large mammals, such as aurochs and tarpan (European wild horse), they began to disappear from more and more areas in Europe. Hunting, poaching, loss of habitat due to land cultivation, and competition with domestic cattle were the major causes, and their decline kept pace with the increase of the population. In England the species disappeared in the 12th century, in South-Sweden in the 11th century and in France and Germany in the 14th century. Only in Eastern Europe the species survived in the last uncultivated areas and the royal hunting grounds. The last wild individuals died in the forest of Bialowieza in 1919 and in the Caucasus in 1926. Fortunately there were still captive animals left and from this small population the animals were set out into natural areas. Currently circa 5,000 European bison live in natural areas, wildlife reserves, breeding reserves and zoos (source: EBPB office, March 2014). From this number, less then 3,500 European bison live in (semi-) wild conditions. Therefore, the wisent is still an endangered species and work is still needed to help this impressive animal out of the danger zone.

The Bison Trail is a walking path within the bison area. The trail is now open.