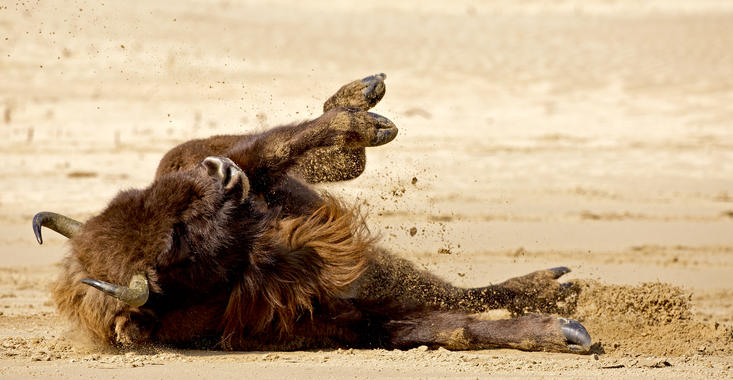 Our European bison is part of the Big 5 of Europe!

The television program The Big 5 of Europe was broadcasted on the Belgian channel Eén during the past few weeks; A quest for the European equivalent to the African Big 5 in five episodes. In the Netherlands, one of these five animals can be found in the wild, the European bison.

Two teams were searching for possible candidates throughout Europe. The species were evaluated for the selection. The bison of Kraansvlak were filmed as representatives of the species. The episode featuring the bison was broadcasted on February 8th, along with the finale. Result: The European bison is selected as part of the Big 5! And with good reason, according to the project-partners PWN and ARK Nature.

A total of sixteen animals were evaluated when it comes to behaviour, looks, rarity and overall chill-factor. A list of nine candidates where selected and eventually distilled to the Big 5; European bison, brown bear, wolf, lynx and wolverine were selected as the most impressive big animals of Europe. A poll on the website of the program featured the European bison as number one, with 14% of the votes. The list was handed to the European president Herman van Rompuy by presenter Chris Dusauchoit.

The election of the European bison means that we have one of the most impressive animals of Europe living in the Netherlands. The bison are living in the dunes near Zandvoort since 2007 and thriving. The herd has 24 animals of which two-thirds are born in Kraansvlak.

Everyone has the opportunity to see the bison in the wild. There is a lookout point and excursions in the bison territory are held regularly. More information on this subject can be found on www.np-zuidkennemerland.nl.

The Bison Trail is also open from September until March 1st. It is closed during the rest of the year because of the breeding season for birds. Hiking the marked trail is an excellent opportunity to see the European bison.