The University of Groningen, Utrecht University, HAS Den Bosch and Radboud University Nijmegen conduct(ed) scientific research in Kraansvlak focusing on the behaviour and impact of Europe’s last wild and largest bovine species. A large part of the ecological studies at Kraansvlak is focused on the subject of grazing in natural areas. Students from various universities study the bison in Kraansvlak. The researchers work together with bison research projects elsewhere in Western and Eastern Europe, so that a broad picture of the ecology of the bison is obtained. Until now there is much unknown about the role of bison in the ecosystem. The few studies available mainly deal with other aspects than ecology and most of them were carried out in populations who were given supplementary feeding. The research in Kraansvlak, using conventional as well as new research methods, will lift a corner of the veil.

One of the aspects studied is the terrain usage of the bison. In order to discover how the animals use their territory, they are equipped with GPS/GMS collar transmitters. The position of the animals is reported every hour and can then be related to vegetation maps. For comparison, the herd of konik horses in Kraansvlak as well as a herd of Scottish Highland cattle, wild living cattle, living in an adjacent dune area are equipped with collar transmitters.

In addition, the animals are also observed directly in order to determine which plants they eat and how they behave towards one another. Manure samples are also taken and analyzed, and by using transects the effect of the bison on forest, shrubberies and grasslands are measured. Initially there were no other large herbivores (horses, cattle) in the area, but from October 2009 onwards also wild living horses are present in Kraansvlak. This enables studying differences in terrain usage, food selection and behaviour between the different species. 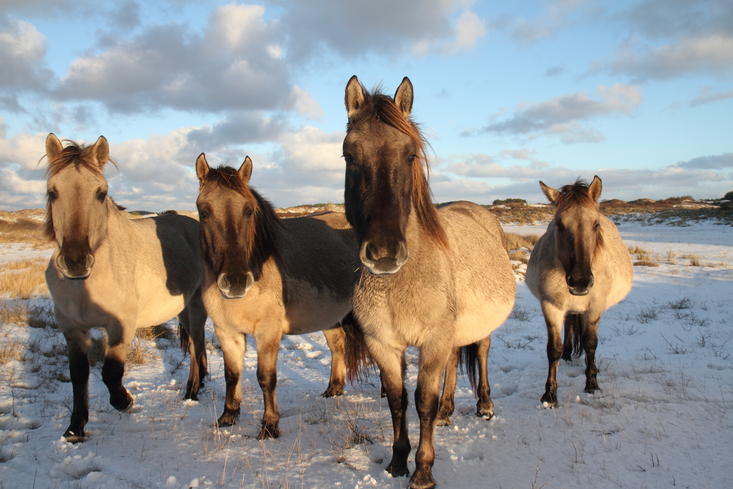 Another important aspect to study is the effect the bison have on the diversity of animals and plants. Bison might create a larger and partly other variation in vegetation structure than horses and cattle due to their weight, foraging on trees and shrubs and their sand bath behavior. The resulting dynamic environment creates opportunities for many types of organisms that depend on it, and that are so typical for the dune landscape. HAS Den Bosch studies the sandy patches that result from the use of bison and other species.

The Universities of Groningen and Utrecht also support the investigation into the relationship between bison and people in Kraansvlak. It is of much importance for the future of bison in Dutch nature to know whether bison respond to people in a curious, defensive, stoical or avoidant way.

Contact us for comments and questions or more information about the bison project.