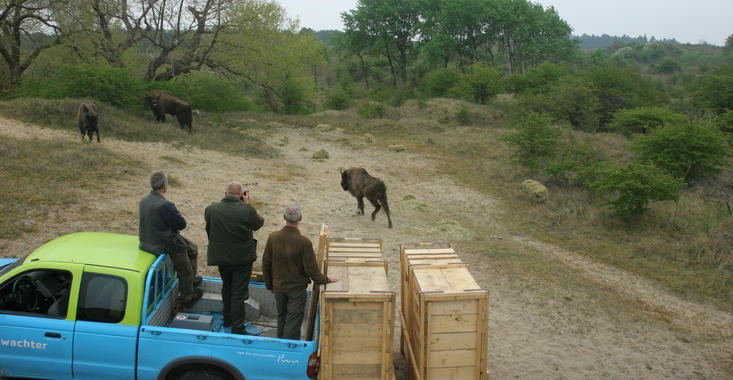 ‘European bisons’ have arrived at Kraansvlak

Biologists and nature lovers have been dreaming for many years of the return of wild grazing animals, such as wisents, to Dutch natural areas. Since early 2004 plans have been made to bring wisents to the Kraansvlak dune area as natural grazers. Now, after more than 3 preparatory years, the dreams have become true: early this morning at 5am three wisents arrived in the sand dunes between Zandvoort and Bloemendaal.

After a long journey from the wildlife areas of Białowieza in Eastern Poland and Pszczyna in Southern Poland the animals arrived at Kraansvlak, part of National Park South-Kennemerland. At 8am 2 young wisent cows and one wisent bull were released. The transport crates were opened and after some hesitation the animals walked toward freedom. From a dune crest they calmly took a look at their new environment for about half an hour. Then they slowly disappeared into the bushes of the sand dunes. Here they can recover from the tiring journey and get accustomed to their new place. It is the first time that wisents are released in a natural area in the Netherlands. The cooperating partners, PWN Waterleidingbedrijf Noord-Holland, Stichting Kritisch Bosbeheer, Stichting Duinbehoud and ARK Natuurontwikkeling, are very enthusiastic about this milestone in Dutch nature conservation. Later this year two more wisents and a calf are coming to the area.

In conjunction with the wisent herdbook in Poland a group of 5 lowland wisents was composed. The female animals stem from a herd of wisents living in freedom in and around the Polish primeval forest of Białowieza, and the bull comes from Pszczyna in the South of Poland, where a small herd of wisents has been living permanently since 1865. At first it was intended to bring the five wisents in one go to the Netherlands. A month before departure, however, one of the wisent cows appeared to be with young. To avoid any risks for mother and child, their removal has been postponed until after summer. Then the calf will be old enough to endure the 24 hour journey in a separate crate. The other cow was in a poor condition after winter. In conjunction with the Polish wisent managers it was decided that postponement of transport would be better for her, so that she can make the long passage to the Netherlands in a good condition.

During the five-year project knowledge and experience will be gained about wisents in Dutch conditions. The University of Groningen and Radboud University Nijmegen will study the effects of wisents on the sand dune landscape and its inhabitants, and their natural diet. Much is still unknown about these things, says also the European Bison Species Action Plan of the IUCN. In addition, it will be observed how wisents and the public go along and how the wisents live together with other large grazing animals. The manager of the dune area, PWN Waterleidingbedrijf Noord-Holland, hopes that the animals will contribute to pushing back the overgrowth of wood and grass in the sand dunes. The Kraansvlak area can accommodate 10 to 15 wisents. Their descendants are destined to be put out into other natural areas. The project will thus add to the survival of Europe’s last wild bovine animal. For research purposes the released female animals have collars equipped with transmitters. The transmitters make it possible to monitor the whereabouts and doings of the animals permanently, also when they are hiding in dense bushes. Wisents are wild animals who shun people wherever possible, but may be dangerous if they feel threatened or cornered. Kraansvlak is therefore an ideal area: nature has always had priority here and the area is closed to the public.

To allow people to still observe the wisents, a viewpoint has been made near the watering place in the wisent area, which is opened officially on 25 April at 10am. From that date on, everybody is invited to watch the wisents from the viewpoint between sunrise and sunset. A folder providing more information about the project is also available.