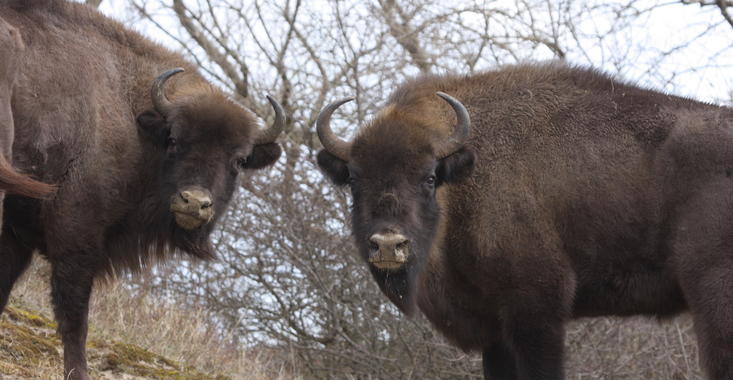 This morning, 18 March 2008, again three wild wisents from Poland were successfully released in Dutch nature. The area where the wisents are allowed to live, within dune area Kraansvlak (between Zandvoort and Overveen), has also been extended. On the day of their arrival the wisents already joined the existent small wisent population at Kraansvlak. In the afternoon rangers and researchers saw the group of six animals explore the surroundings, moving in line.

Biologists and nature lovers have been dreaming for many years of the return of wild large grazing animals such as wisents to Dutch natural areas. In April 2007 the Netherlands had the premiere: the first three wisents were released at Kraansvlak. Originally the group would consist of 5 animals, but one of the cows proved to be in calf. Reason to transport the group in 2 separate expeditions.

Today the animals arrived at Kraansvlak, part of National Park Zuid-Kennemerland, by a special transport from natural area Białowieza in East-Poland. Around 8.30am two adult wisent cows and the calf of one of them were let out watched by the press and a select group of invited guests. First the transport box of the calf was opened, immediately followed by those of its mother and the other cow.

Project partners PWN Waterleidingbedrijf Noord-Holland, Stichting Kritisch Bosbeheer, Stichting Duinbehoud and ARK Natuurontwikkeling are very glad that the transport went well and that the herd is complete now. The transport was partly sponsored by Zandvoort Circuit.

Viewpoint
To observe the wisents near the watering place in their area, a viewpoint has been made. The animals show up regularly there. Everybody is welcome between sunrise and sunset. More information and the route to the viewpoint can be found on www.wisenten.nl/wisenten/kom_kijken.

Wisent herdbook
The current group of lowland wisents was composed in conjunction with the wisent herdbook in Poland. The female animals and the calf stem from the free-living herd of wisents around the Polish primeval forest of Białowieza and the bull originates from South-Polish Pszczyna, where a small herd of wisents have been living uninterruptedly since 1865.

Scientific research
The wisent pilot at Kraansvlak will last five years and will be accompanied by scientific research during that period. One of the objectives is gaining knowledge and experience about wisents under Netherlands conditions. The wisents at Kraansvlak need not be supplementarily fed. They are well able to gather their food themselves. Groningen University and Radboud University Nijmegen are studying the impact of wisents on dune habitat and its fauna and their natural diet and eating habits. According to the European Bison Species Action Plan of the IUCN (International Union for Conservation of Nature) there is a great lack of knowledge in this. In addition, it will be studied how wisents and the public react to one another and how the wisents live together with other grazing animals. Natural area managers in the Netherlands and Germany are particularly interested in the interaction between the public and wisents. The manager of the dune area, PWN Waterleidingbedrijf Noord-Holland, hopes that the animals help fight grassification and forest formation in the sand dunes. Observations have already yielded some interesting results. In summer, for example, the animals like to spend a lot of time in and near the water. Due to the fact that they take regularly sand baths or rest at bare sandy spots, there is an increase of dynamics in the area. In the long term this will be wholesome to nature. Observations also showed that in autumn they love eating acorns and lots of berries. In winter their menu includes grass and bark of shrubs. In the future Kraansvlak can accommodate 10 to 15 wisents. Their offspring will be available for other natural areas. In this way the project helps this last wild European bovine animal to survive.

The released female animals have collars equipped with transmitters for scientific research. In this way the animals can be located and their movements monitored, also when they hide in dense brushwood. Wisents are wild animals who shun humans wherever possible, but may become dangerous when they feel threatened or driven into a corner. For that reason Kraansvlak is an ideal area: nature has always been number one here and the area is therefore closed to the public.