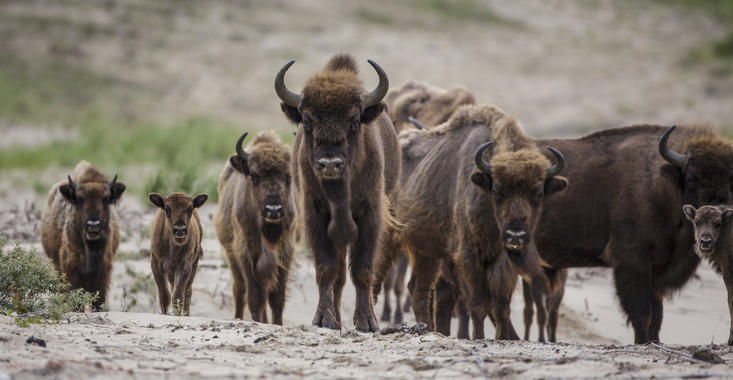 The first Dutch project with bison started in the dunes near Zandvoort in 2007. The European bison has since the start quadrupled to 24 animals. The majority of the animals have been born in Kraansvlak.

The first three bison were introduced into Kraansvlak in 2007. The group was completed by releasing an additional three bison from Poland one year later. Three more bulls from France were added last May to bring new blood into the herd. The rest of the herd is born in Kraansvlak.

In Kraansvlak calves are born every year since 2009. They are given a name and are added to the pedigree. All the European bison in the world of which data is known is mentioned in the pedigree. It is used to coordinate the preservation of the species. The European bison is still an endangered species since it almost got extinct in the beginning of the 20th century.

The calves were born earlier this year than before with no less than six calves already, and still counting. The youngsters are frolicking around with each other and are often spotted by the researchers and foresters. Project partners PWN and ARK Natuurontwikkeling are proud of the fact that the project contributes considerably to a better future for these impressive animals.

Last May 22nd was an important day in Kraansvlak. New unrelated bulls were brought in from France. They were given the opportunity to get used to their new environment for the first two weeks, apart from the rest of the herd. Then the rest of the territory was opened to them to go and find the herd. It was an exciting time; how would the animals react to each other? Soon it became obvious that there were few barriers. They joined the herd and were even seen with the adult bull. With the coming mating season it will be interesting once again. What will the cows think of the French bulls? We will probably find out next year with the birth of the new generation of calves.

The herd, calves and French bulls were filmed earlier this summer by the Dutch television program Vroege Vogels.