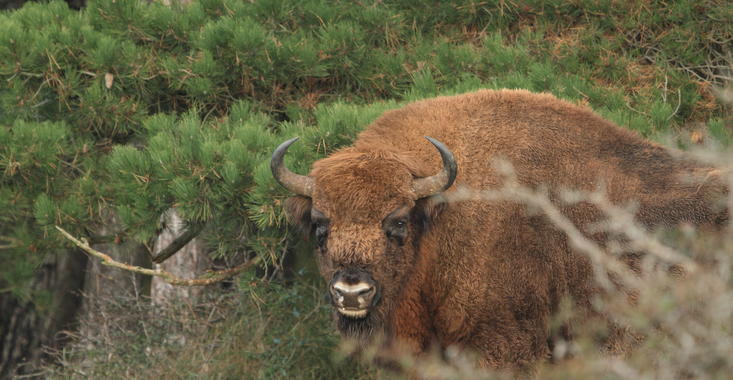 Always wanted to see a wisent, also known as European bison, from up close and personal? Grap the chance during the unique wisentweekend on 4 and 5 July taking place at the visitor centre 'De Kennemerduinen' in Overveen. Podryw, the impressive ancestor of many of the Kraansvlak bison, died in 2014 but will be back and fully displayed from July onwards.

During both days from 10:00 until 17:00, a ranger of PWN will be present near the newly established wisentcorner in the visitor centre to tell about the animal and answer questions. The entire centre will focus on the wisent, and many special acitivities will take place. On both days there will be a special wisentexcursion at 11:00, and at 12:00 you can hear all about the animals and the project in Kraansvlak during a special lecture. Also you can learn more about the research that is going on in the wisent project. In addition, a movie how Podryw has been stuffed will be shown.

Since 2007, a herd of bison lives under natural conditions in Kraansvlak, a dune area between Overveen and Zandvoort. PWN and ARK Nature started the project with a group of 6 animals. Due to natural growth, the number of animals increased to 19. Also this Spring calves have been born, and now the herd consist of 21 bison. They are doing well in the beautiful dune area of Kraansvlak.

All the bison born in Kraansvlak are included in the European Bison Pedigree Book which is maintained in Poland. Kraansvlak is a breeding ground for bison to go to other nature sites in the Netherlands as well as Europe. The project therefore contributes to the conservation of the European bison, still an endangered animal in Europe.

PWN started with bison in the area to combat grass and shrub encroachment in the dunes. The results are positive. Since the start of the project much research has been undertaken as there are still gaps in our ecological knowledge of this species. The results are actively shared within the Netherlands but also Europe-wide. Scientists regularly visit Kraansvlak to see and learn how this herd lives in our Dutch wild nature.