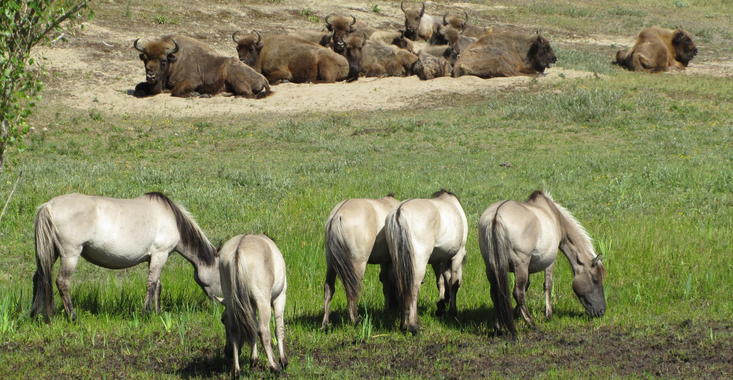 Eight years have passed since PWN, Stichting Duinbehoud, Stichting Kritisch Bosbeheer and ARK Nature brought back European bison to Dutch nature. The animals are living in the dunes of Kraansvlak, in National Park Zuid-Kennemerland. On April 24th 2015, it was exactly eight years ago when the first bison were released in the Kraansvlak dune area, located near the popular beachtown of Zandvoort.

Return of the bison

Originally, the bison played a key role in European nature and the species also roamed our Western part of the continent. Two important reasons to bring back the bison to our country. Being a large herbivore, the bison has quite some impact on the growth of plants including in patches of pioneer vegetation. Different species of herbivores complement each other, and by facilitating each other with their foraging behaviour they have more impact on nature. It often seems bison have more effect in sandy soil areas then its cousin; wild living cattle.

ARK Nature was asked and together with Stichting Duinbehoud joined the upcoming bison project of nature manager and water company PWN, and Stichting Kritisch Bosbeheer. In the Spring of 2007, the first three bison were released into Dutch nature, followed by another three animals in 2008. All these animals come from Poland. Since then bison are living in Kraansvlak, a dune area between the towns of Overveen and Zandvoort. At first, the project started as a five year pilot project accompanied by scientific research, but after a positive evaluation in 2012, main project partners ARK Nature and PWN decided to prolong the project with five more years. In the meantime we are already looking ahead to a continuation after 2017.

Since the start of the project the bison area has been enlarged to 330 hectares (2014). Furthermore, the project team is committed to work towards more areas where bison can roam in Holland. In seven years, the bison herd in Kraansvlak grew from the initial six animals to nineteen. Also this year, calves are again expected.

One of the main reasons to release bison in the dune area, is because of their impact on vegetation. Due to the increase of nitrogen deposition and a significant fall in the number of rabbits, the area became overgrown by grasses, shrubs and trees. Flowering plants became scarce and pioneer grasslands slowly disappeared. Manager of the area PWN was interested to see if bison could have more effect than konik horses and Scottish highland cattle in the management and conservation of the dune area. This seems to be the case: bison take many sand baths and increase the connectivity of the sandy paths they use. On a small scale the dunes are nowadays able to be more dynamic once again, and pioneer grasslands are recovering. Sand lizard, seaside pansy, and species like sand wasps and mining bees profit from this. In addition, many plant seeds are sticking to the coat of bison and are dropped somewhere else, thereby increasing the dispersal of these plants. Houndstongue and Carline thistle are profiting. Grasses, upcoming trees, and shrubs are kept short and flowers are abundant. In short: the bison has earned its role in the dune management of the area.

Bison open up shrubs and with this behaviour they facilitate horses, which are feeding on the young grasses. With all this grazing activity, the grasses are locally kept short and with their hooves the animals break open the grass covered soil, resulting in flowers coming up. In turn rabbits profit from these short and flower-rich grasslands. Upcoming young shoots of trees and shrubs are favoured by fallow deer and roe deer. In this way, the different herbivores work together with a species-rich and varied dune area as result.

Increasing the current ecological knowledge of bison is an important goal of the bison project in Kraansvlak. The European bison is still listed as an endangered animal. Much research is conducted. Insights from Kraansvlak are actively shared with colleagues in nature management in the Netherlands as well as abroad.

Besides increasing the knowledge of bison ecology, also experiences are gained with the interaction between bison and people. In Kraansvlak, it is clear that bison are perfectly able to be visited by people. Of course, visitors should always respect wild animals such as bison and are informed to keep a distance of at least 50 metres to not disturb the animals in their natural behaviour. More than ten thousand people have visited the bison in Kraansvlak in the past years. Partly, by joining excursions guided by rangers, but also by using the Bison Trail by themselves. The Bison Trail opened in 2012 and is a unique walking route through part of the bison area.

The bison project in Kraansvlak contributes to the knowledge and conservation of the European bison of which there currently are approximately 3,500 in (semi)wild nature. Moreover, the project is important as a knowledge base for future release of bison in other nature areas in the Netherlands.