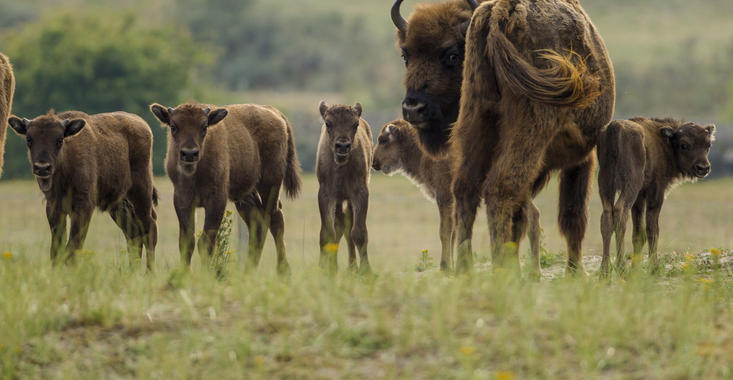 In Kraansvlak, a dune area near the Dutch coastal town of Zandvoort, five bison calves have been born this year. European bison are living in this nature area for eight years now. In 2007, here the first project started in which bison live in Dutch nature. The animals are doing very well and the group of originally six animals has grown into a well sized herd.

At the beginning of the 20th century, the European bison almost disappeared as it became extinct in the wild. Currently, the overall European bison population counts some 5,000 animals. Still, the species is not out of the danger zone. The Dutch project of PWN and ARK Nature contributes to the preservation of this still endangered species, the largest land mammal of Europe. All bison born in Kraansvlak are included in the international pedigree book that is maintained in Poland.

By sharing experiences gained in Kraansvlak, the Dutch bison project adds valuable information to the existing knowledge of the European bison, also known as the wisent. One of the important lessons learned is that in Kraansvlak, the bison show a preference to be in half open habitat. This in contrary to the previous belief that the bison would be a typical species of closed forest. By exchanging this kind of knowledge with other European bison areas, we fully believe it helps to offer a better future to the species.

Dune area Kraansvlak is part of National Park Zuid-Kennemerland, and is managed by PWN. In 2012 and 2014 the bison area has been enlarged so that the animals now have over 300 hectares to roam in. Together with other grazing species such as Konik horse, fallow deer, roe deer and rabbit, the bison are part of the natural grazing taking place in the dune area.

Public can also enjoy this scenery from the special observation point next to the dune lake and also from the recreational paths surrounding the fenced bison area. Furthermore, guided excursions are offered on a regular basis. And since 2012 public can visit the bison on their own by using the Bison Trail. This trail is opened between September and March, after which it closes due to the bird breeding season. Visitors are asked to stay on the trail as the area is for long been a rest area for nature.

Of the current number of bison, twenty have been born in the area. De majority of these animals are offspring from the bull imported from Poland in 2007. This magnificent bull died last year but can nowadays be seen from up close as he is back in the National Park in mounted form. In the beginning of July his return was celebrated during a special Wisent Weekend in the visitor centre of the National Park.