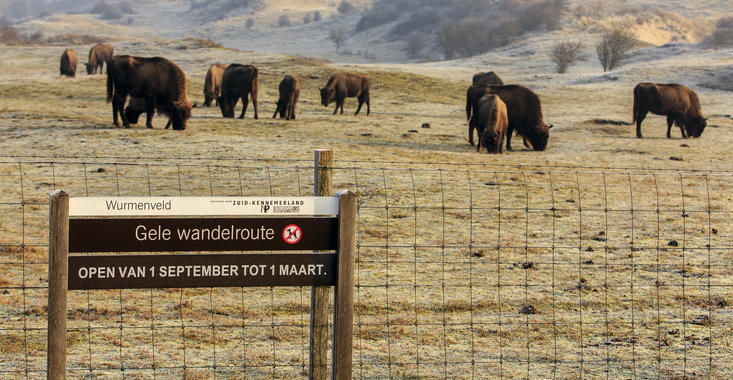 The past months the Bison Trail in Kraansvlak has been visited by public for nearly 3800 times. The trail is currently closed, like every year, and opens again later this year.

Since 2007 bison are present in Kraansvlak. The dune area is historically closed for public. Since 2008, guided excursions by rangers of PWN are offered to give people the, for Holland, unique possibility to meet bison in the wild on their own. A lot of enthusiastic responses from attendants followed. The bison themselves seem perfectly fine with these visits, as long as you do not approach them. Fifty meters is the distance to keep.

In the past years the number of bison walks offered during weekends has been enlarged. Public can make a booking via www.np-zuidkennemerland.nl. Besides, the option is offered to go to Kraansvlak to search for the bison with your own group, guided by a ranger. Also special photo safaris are taking place in which ranger and nature photographer Ruud Maaskant accompanies small groups to photograph the bison in the beautiful dune landscape.

In 2012, projectpartners PWN and ARK Nature opened a special walking route in the Western part of Kraansvlak thanks to the positive experiences. During winter months public has the opportunity to make use of this route. Special information panels located at both entrances include guidelines to take into account when using the trail. Furthermore, volunteers are present on a regular base to further inform the visitors about the bison project.

After an enlargement of the terrain, the Bison Trail has been extended to 2.5 km. The past season the trail was opened from August 29 untill the 1st of March. Nearly 3800 visits took place in this period; an increase of more then 1000 compared to the previous year. Thanks to the responses of visitors we know the Bison Trail is a huge succes. People from various regions come over to use the trail, even from abroad, to experience this unique opportunity to walk in bison territory. The past months the bison often have shown themselves near the trail.

Later this year the Bison Trail will reopen again.

For the exact date, keep yourself informed using this website and our social media pages.