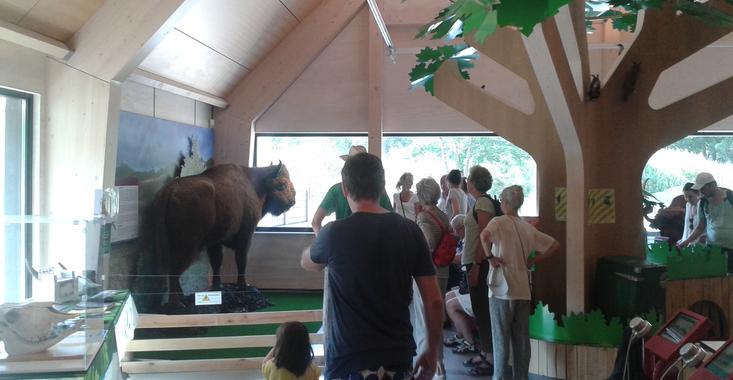 During the weekend of July 4 & 5, a unique wisent weekend took place in visitor centre 'De Kennemerduinen' in Overveen. Reason for this special weekend was the return of our late bull of the wisent, also known as European bison, that from now on is displayed in the centre permanently. The bull is placed under the spotlights of the newly decorated wisent corner. Despite the warm weather, circa 5,500 visitors checked out the wisent bull and were much impressed by his appearance.

Besides presenting the mounted bull to the public for the first time, all kinds of activities related to the bison took place. Both days, a prolonged excursion to the living area of the bison was organized. Guided by an enthusiastic ranger and dito volunteers, the bison herd was spotted on both days. On Sunday the nice news could be announced that a fifth bison calf born this year had been spotted in the herd. With this newborn, the herd now includes 24 members.

With the help of a so called green screen, visitors were given the opportunity to make a picture with the herd of bison in the background. This way, they could take home a unique souvenir from this weekend. Of course, much information was given about the bison, and the bison project which started in 2007 in the dune area called Kraansvlak. Apart from beautiful images, the difference between a bull and a cow was clearly indicated by using skulls of both. Children in specific were very much interested. For them, also a special quiz was available. Furthermore, a lecture was given with much detailed information about the species and the project, and gorgeous pictures from Kraansvlak to endorse the story. Also, the bison movie of Dick Harrewijn was shown, next to the video about the mounting of the bison bull made by RTV Noord Holland.

The bison of Kraansvlak are included in the international pedigree book of this endangered species. During the wisent weekend, also attention was paid to the international contributions to ensure a better future for this largest land mammal of Europe. The project in the Dutch dunes pays a fair contribution to the enlargement of knowledge about the European bison. And besides, our bison -in specific late bull Podryw- provide a fine contribution to enlarge the current number of bison roaming in European nature. Meanwhile, twenty bison are living in Kraansvlak that have been born in the area.