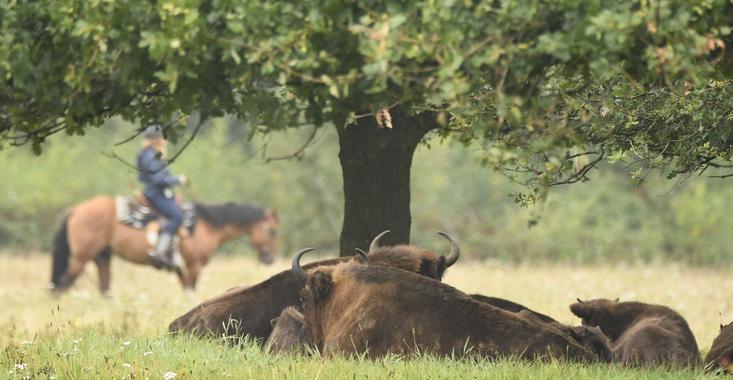 European bison get used to visitors

Commissioned by ARK Nature, Utrecht University studied the responsive behaviour of European bison to various types of recreationists. The research shows that bison and visitors go well together, provided the animals get time to get used to their new habitat, and visitors follow the guideline to keep a distance of at least 50 meters from the animals.

The European bison, also known as wisent, is a rare animal. The wisent disappeared from the wild about 100 years ago, but makes a comeback now. Due to preservation efforts, the European bison is returning to more and more European nature areas. Since 2007 there is a bison population in the Kraansvlak dune area near Zandvoort, and in 2016 bison have also been welcomed in the Dutch nature reserves Maashorst and Veluwe. ARK is involved in all these bison projects. Up until now, little research had been done into how bison and recreationists go together in well-visited areas. The research carried out by the Copernicus Institute at Utrecht University therefore contributes to a responsible return of this endangered species in urbanized Western Europe. 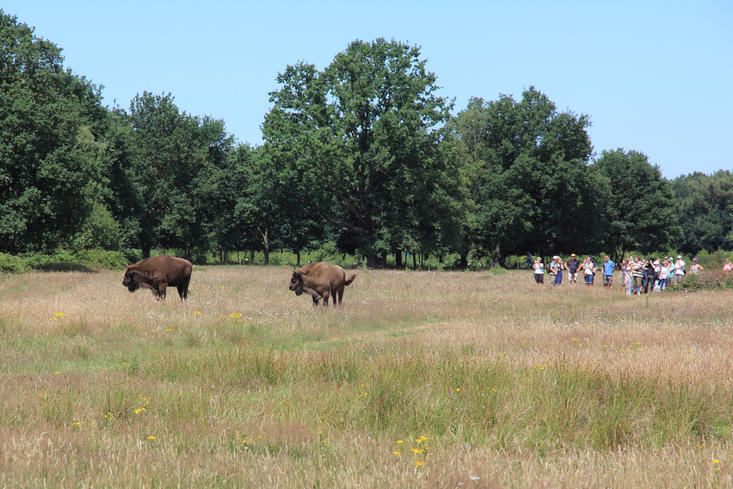 Starting point for bison introduction in the Netherlands is that their terrain - after a period of time - can become accessible for hikers (with leashed dogs), cyclists, and horseback riders. Experiences from abroad already showed that bison and people can go well together. And in the last decade, the bison project in Kraansvlak made the case for bison and hikers going well together. To verify these experiences for other forms of recreation for the Dutch situation, it was decided to conduct further research. The results of the study can be used in the Maashorst to achieve free access to the bison area for various recreational groups. The results of the study contain interesting learning points. For example, the herd that has been living in the Maashorst since Spring 2016 required a longer habituation time than expected. This herd came largely from the Kraansvlak, where it had already been accustomed to the public for several years.

The first studies in the Maashorst started six months after introduction of the bison and initially showed considerable differences between the herd in the Kraansvlak and those of the Maashorst. Slightly more irritated behaviour was observed among the herd in the Maashorst as a response to recreational users. For example, in the Maashorst, more pounding with hooves or head shaking has been observed. This hardly happened in the Kraansvlak during the same study period. A year later the same study was repeated and no statistically differences between the two areas were found anymore. The research shows that if you move bison who have become accustomed to people, they will have to get used to their new habitat and to the recreational visitors in the new area for over a year.

The research also confirms that a too close approach can lead to a defensive action; that is, a (false) attack to enforce space. During the field experiments, this happened once after the test subject involved had repeatedly breached the 50 meter distance guideline. The person suffered a minor injury and the bison bull in question was removed because he persisted in offensive behaviour after the incident. The study, therefore, recommends to gradually built up recreational pressure when opening areas where bison roam. In addition it is of utmost importance to inform the public in detail to maintain strict rules, and to enforce these rules. At the same time, monitoring the bison stays important to get detailed information about the reaction of the animals to recreationists and vice versa.

The results of the study may also be of importance to other nature reserves where bison are reintroduced, both in the Netherlands as well as abroad. The research is therefore actively shared. For example during the latest European bison Conference in Poland, where bison specialists from all over Europe meet annually.