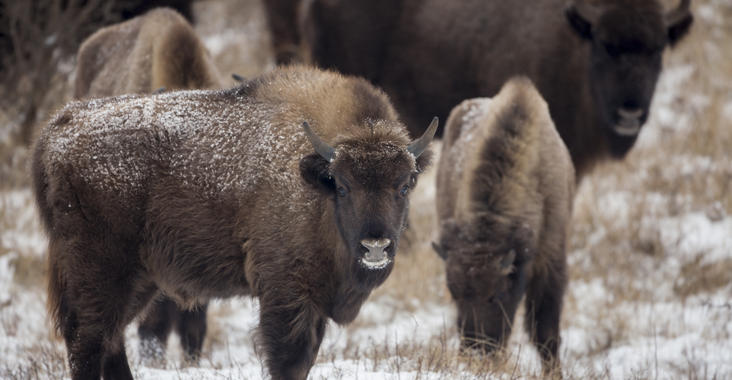 European bison Kraansvlak on the move

Seven European bison from Kraansvlak, part of National Park Zuid-Kennemerland near the beach town of Zandvoort, are being relocated to Spain. In three Spanish nature areas they will provide for more genetic variation in the already present bison herds.

The bison project in Kraansvlak started in 2007 and since then project partners PWN and ARK Nature have seen more than 30 bison calves growing up in this dune area. The bison that are now transferred to Spain are all born in Kraansvlak. The herd had grown to 26 animals. That size is rather high, given the current size of the bison area (over 300 hectares) and year-round food availability. The translocation of the group of 7 bison means that the remaining bison herd in Kraansvlak will enter the winter period with 19 animals.

The European bison, locally known as wisent, is still an endangered species on IUCN’s Red List. Currently, more than 5,000 bison live in European nature, but that is not enough for a sustainable future of the species. International cooperation is of great importance and the Kraansvlak project therefore contributes to the conservation and distribution of bison in Europe.

Together with other large herbivores such as horses and cattle, bison give way to a varied landscape with trees, shrubs and grasslands. Bison also take a lot of sand baths therewith contributing to the dune dynamics in Kraansvlak, benefiting many plants and animals.

In recent weeks, the bison that are being translocated have been well prepared for their journey. With the use of a (catching) facility for European bison - specially designed by PWN - the animals were examined by the project veterinarian. PWN and partner Ekogrön have intensively monitored the animals in the past period and ensured that the animals could start their journey to Spain in best condition.

To facilitate the transport, we cooperate with the Spanish branch of the European Bison Conservation Center (EBCC). Earlier, this collaboration has already made possible the move of bison from the Netherlands to Spain. Now, the bison are on their way to three nature reserves in northern Spain where already bison live: Atapuerca in Burgos (where a bull originating from Kraansvlak is now the dominant bull) and two private estates La Perla and La Serreta, both in Segovia. The relocation of the group of bison is partly funded by a contribution from Stichting Van Klooster. The Dutch Postcode Lottery is contributing to the European bison project in Kraansvlak.