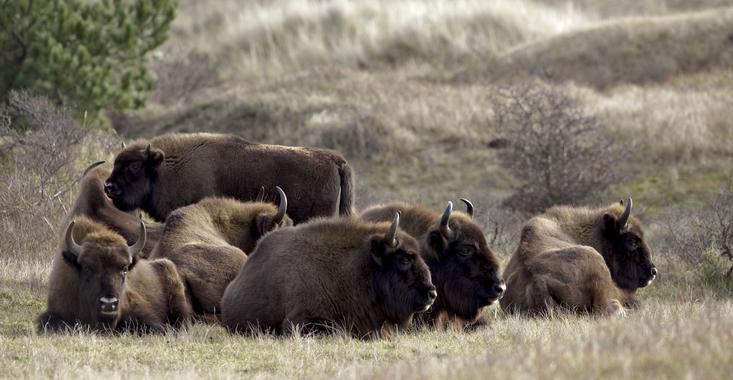 The past months our bison project in Kraansvlak received attention from several international media. Since the start of the project in 2007 sharing our experiences has been an important goal. This is being done using many ways. We share information on the website www.wisenten.nl/en, our social media channels and via press releases, interviews, articles, and of course locally during public excursions and in Visitor Centre De Kennemerduinen.

The wisent is an European species, also known as European bison, listed as 'vulnerable' on the Red List of the International Union for Conservation of Nature (IUCN). Although much efforts are still needed to safeguard a better future for the species, the number of E. bison is showing an increasing trend the past years. That is good news. In addition, more and more is getting known about their ecology. The research conducted in Kraansvlak contributes to this.

The success of this first Dutch bison project does not go by unnoticed. We see an increasing interest from outside The Netherlands. On a regular base foreign visitors have been welcomed at the Bison Trail, and also online there is a fan base from beyond Dutch borders.

The past period of time several international media have highlighted the bison project in Kraansvlak which last year celebrated its 10th anniversary. Articles have been published on Mongabay and the Guardian, followed by radio interviews on BBC Radio 4 and TalkRADIO (both United Kingdom). For an overview have a look at https://www.wisenten.nl/en/media. The project has been mentioned, also in the Guardian, in two articles: Bringing back bison – and more tales of animal hope, and Rewilding success stories - Reintroduction programmes of animals driven from their once-natural habits are a cause for optimism. A picture by PWN ranger Ruud Maaskant was published in The week in wildlife – in pictures. In response to the article in the Guardian the project has been mentioned in other media all over Europe; from Belgium in De Morgen and Het Nieuwsblad, Spain, Croatia (here and here), Slovenia, a magazine in Hungary, and The Week Junior in England. And more is about to follow the coming months, so stay tuned using our social media channels!