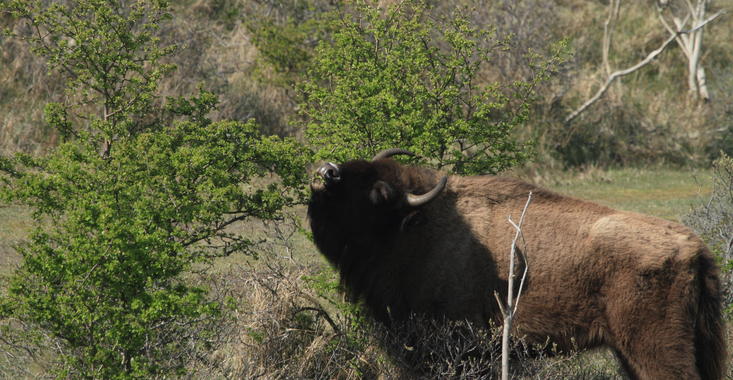 Since 2007, European bison live in the Kraansvlak dune area, part of Zuid-Kennemerland National Park, in a project led by PWN and ARK Nature. From the start of this first bison project in the Netherlands, information is gathered in order to increase our understanding of the ecology of this still endangered species, and its impact on the landscape. Recently, a mushroom eating bison has been spotted.

At Kraansvlak, bison are managed with less human intervention, in natural densities, towards becoming self-sufficient with no additional feeding. Research into the diet of Europe's largest herbivore and terrestrial mammal has already yielded a lot of knowledge. Especially grasses and woody plants are eaten and - depending on the season - leaves, twigs and bark are consumed. In autumn, bison eat plenty of nutritious acorns. The last few weeks also creeping willow and poplar have been part of their menu. Now for the first time in the Kraansvlak area a bison foraging upon mushrooms has been discovered. A forester of PWN made the remarkable observation and captured the moment on camera. A young bison had its mind set on mushrooms located around a hawthorn. It seems to be the Parasol mushroom (Macrolepiota procera); a mushroom that is also used for human consumption. For humans, however, this mushroom is slightly toxic in raw form. 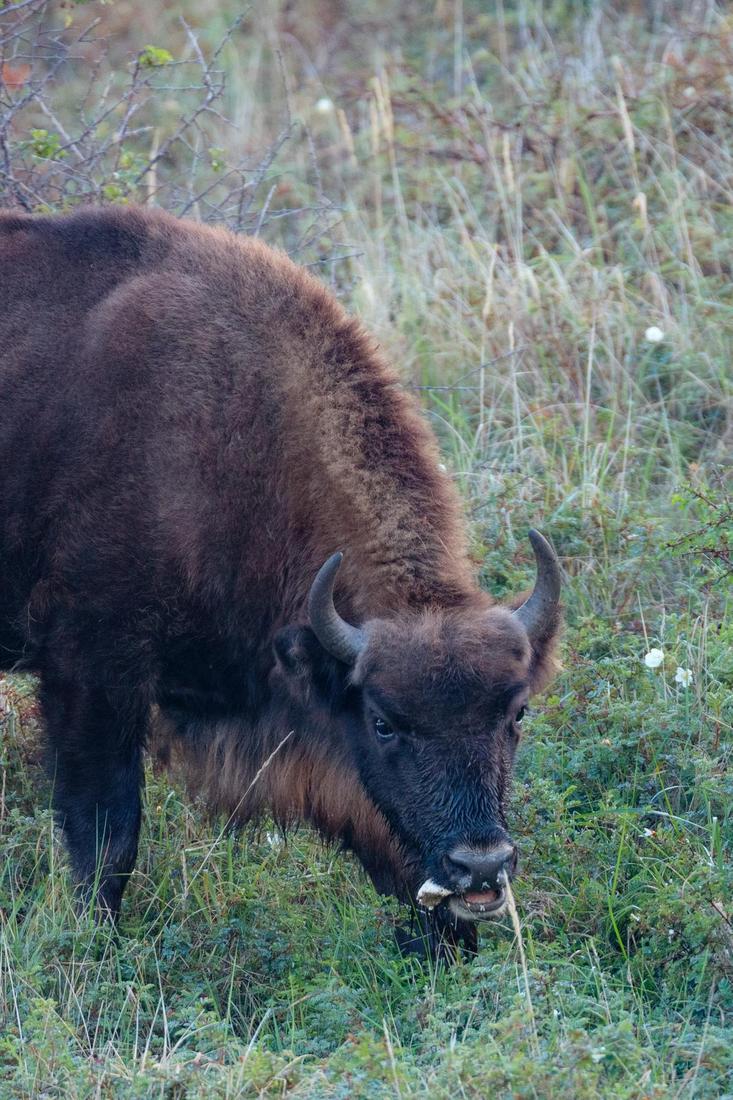 European bison are renowned for not being very selective about their food. From other European bison areas, we know they eat a wide variety of vegetation. In Poland they are known to eat mushrooms occasionally. In 2016, in the Dutch Maashorst nature reserve, bison have also been seen eating from Sulphur tuft (Hypholoma fasciculare). In Kraansvlak, the special observation made now adds to the list of food sources as it concerns a different mushroom variety. The discovery further increases our knowledge about the food behaviour of European bison.

Variation in the landscape

The presence of bison clearly leaves its marks in Kraansvlak. With their natural grazing behaviour - and alongside other species such as konik horses and rabbits - bison play a role combatting the overgrowth of grasses and shrubs in the dune area. Each animal species has its own food preferences, and the bison eat from a lot of trees and shrubs besides grasses. The way in which the bison herd uses the area also creates more variety in the landscape. For example, they regularly take sand baths and make sandy paths, which provides variety that gives other animal and plant species a chance. By doing so, the bison contribute to the diversity and keep this dynamic dune landscape half-open.