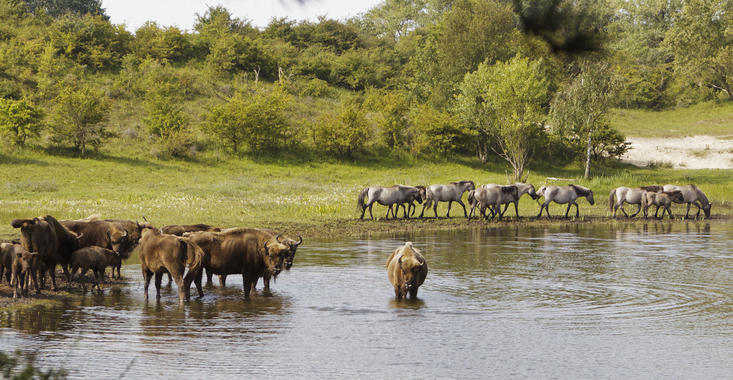 Since the arrival of European bison -also known as wisent- in Dutch dune reserve Kraansvlak near Zandvoort in 2007, ecological research has been carried out in the project of PWN and ARK Nature. This research has yielded valuable information about the ecology of the bison and results are now published in the scientific journal Restoration Ecology. This shows that bison are perfectly able to survive in semi-open landscapes without receiving additional feeding.

Before the introduction of European bison to Kraansvlak in National Park Zuid-Kennemerland, little was known about bison that live in semi-open landscapes and where no supplementary feeding takes place. Until then, ecological research focused on bison that live in forested areas, such as Bialowieza in Poland. Because at the time virtually in all areas with bison feeding during winter time occurred, knowledge about foraging behaviour and habitat use was lacking for bison living under more natural conditions. It is of importance to expand the knowledge about this still endangered species in order to continue working towards a safe future for the European bison. 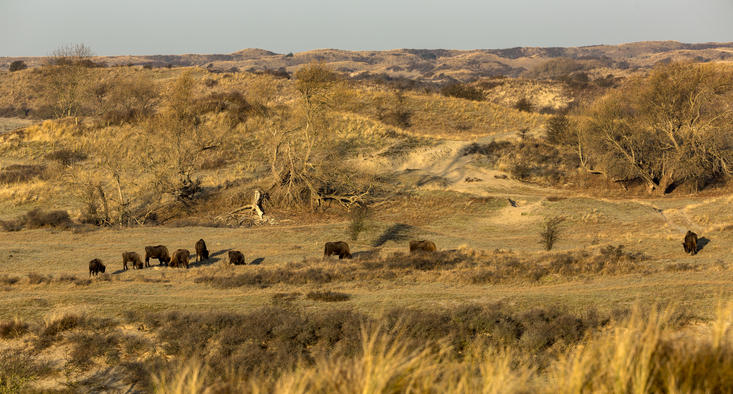 One of the long-term studies in Kraansvlak is studying the diet of European bison, konik horse and Highland cattle. Since 2007, dozens of students have participated in observing these large grazers in Kraansvlak (bison, horse) and the Kennemerduinen (cattle). Through a fixed research protocol, data was collected in all seasons listing what vegetation the specific species had eaten. In this way it was possible to investigate both differences as well as overlap in their diets.

The results are now published in the scientific journal Restoration Ecology. It is clear that European bison, konik horse and Highland cattle mainly forage on grasses during all seasons. Their diets consist of grasses for over sixty-five percent. In addition, bison and cattle appear to eat about twenty percent of woody species, such as spindle tree, common oak and creeping willow. Horses supplement their diet in particular by eating lake shore plants. There are clear differences between bison and cattle in terms of the part of woody plants they eat. Bison mainly debarks, while cattle mainly eats twigs.

The study not only contributes to increasing the existing knowledge about the European bison, and its comparison with other large grazers. We see that bison and cattle have a lot of overlap in their diet, but they eat from different parts of woody plants. This reduces the chance of food competition if they live together in an area. The results are of overall significance as they indicate that more areas that are less forested and where no supplementary feeding is taking place may be suitable for bison. This is important because an increase of the bison population is necessary in order to get out of the danger zone. Adding new areas where bison can thrive enables an increase of the number of animals.