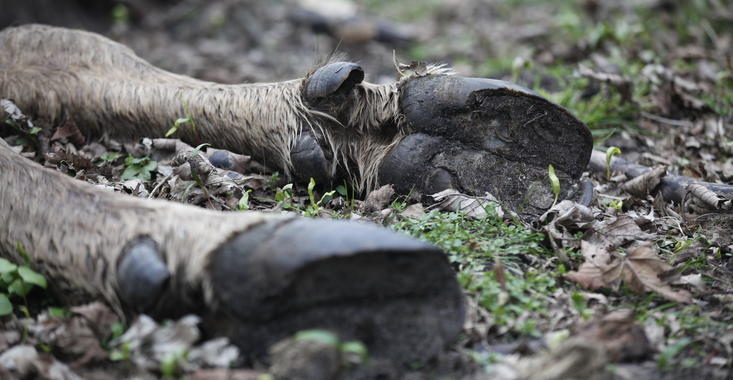 At the end of 2018 the oldest cow of the Kraansvlak herd passed away. The animal was found short after death by one of the park rangers from the bison project from PWN and ARK Nature. This offered the unique possibility to monitor what would happen after her death. Wildlife cameras and GPS data can give unique insights on how other animals react on this natural happenings.

European bison are known social animals. They live in herds with strong kinship relations and a marked hierarchy. Older cows lead the herd. From scientific research carried out in Kraansvlak came out that this cow had an important status within the bison herd. The female arrived in 2008 from Poland when she was 7 years old. For 10 years she was the oldest and most experienced bison of the herd. She reached the respectable age of 18 in the Kraansvlak and delivered 4 calves, the last one in summer 2018. Bison females living in nature live in average 20 years.

Carcasses are very important in nature. A dead animal fulfils the function of a crowded restaurant where thousands of animals are fed. Imposing species such as raven and fox are attracted, but also countless insects such as flies in carrion beetles benefit from it. Cadavers are the last link in an ingenious food chain. Death of one animal means life for another. When a large herbivore dies, it is often observed that herd members, which the dead animal belonged to, pay frequent visits and check their farewell mate for days or even weeks. The surrounding is flattened and trampled by visits and countless wild trails appear ending up at the dead animal. The higher the rank of grazer, the more intense and the longer the goodbye may be. In human terms we call this "saying goodbye."

Out of the monitoring during the first weeks after the death of the European bison cow, it turned up that the other bison visited her regularly. Several times old bison touched the head of the deceased cow with their own head. Her young calf stayed close to his mother for a few days. He is now back in the bison group. Also visits from foxes, Konik horses, Scottish highland cattle have been frequent. They also touched the cow and smelled the carcass. A konik licked the fur from the wisent. Also once the cameras captured how the young bison calf chased away the group of highland cattle from the surroundings of his mother.

The bison project of Kraansvlak started in 2007 with the arrival of the first European bison in Dutch nature, in the dunes near the municipality of Zandvoort. In more than ten years, much has been learned and shared out of experience and research with European bison in our Dutch landscape. The project under partnership of PWN and ARK nature was completed in 2018. During the last seven years Yvonne Kemp from ARK Nature have coordinated the project. Now, after 2018, PWN will continue gaining knowledge and exchanging knowledge about European bison living under natural conditions.