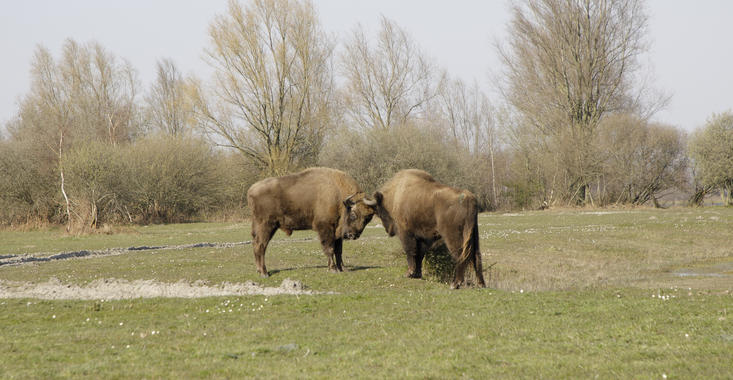 At the end of March three European bison bulls from the Kraansvlak herd travelled to new homes and arrived in good health. Two of the bulls were transported to a nature reserve in Czech Republic. The third travelled a short distance to the province of Zeeland. The exchanging of bison bulls plays in important role in keeping the gene pool healthy.

The six-year-old bull from the Kraansvlak herd was released at the Slikken van de Heen nature reserve in Zeeland in the afternoon on 26 March. The French-born bull has spent the last four years in Kraansvlak where it sired offspring. Now it will contribute its valuable genes to a new herd.

Within moments of its arrival, the bull was checked out by the rest of the herd, grazing not far from where it was released. First the females and then the calves approached the bull, gently sniffing its scent and rubbing up against it.

This was followed by an encounter with the oldest bull in the herd: an impressive four-year-old. PWN nature expert Esther Rodriguez watched the first meeting between the two males with her own eyes and described the interaction as ‘surprisingly gentle’. The bulls spent twenty minutes gently determining which of them was dominant by sniffing each other's scent, pushing each other with their heads and swinging their heads from side to side. Then the Zeeland herd went back to grazing as if the new bull had always been one of them.

The European bison calves born at the Milovice Nature Reserve in Czech Republic last year were sired by the dominant male. One of the two new bulls released into the herd is expected to take over this role. The two bulls born in Kraansvlak are now three and five years old. European bison bulls reach sexual maturity at the age of three. This is the ideal time for them to be introduced into a new herd. At the moment the bulls are still young, but one of them will eventually emerge as the dominant male at the reserve. Released shortly after their arrival, the Kraansvlak bulls headed into the shrubs and disappeared from view.

While numbers have increased, European bison, also known as wisents, are still on the IUCN Red List of Threatened Species. It is very important that steps are taken to ensure the survival of Europe’s largest land mammal. At the end of 2018 the recorded population was 7,500 (source: European Bison Pedigree Book 2018). Thanks to a successful collaboration between nature manager PWN, nature grazing company Ekogron, herd manager FREE Nature, nature manager Het Zeeuwse Landschap, veterinarian Mark Hoyer and Czech nature manager European Wildlife, the needed migration of bulls could go through even in corona time.