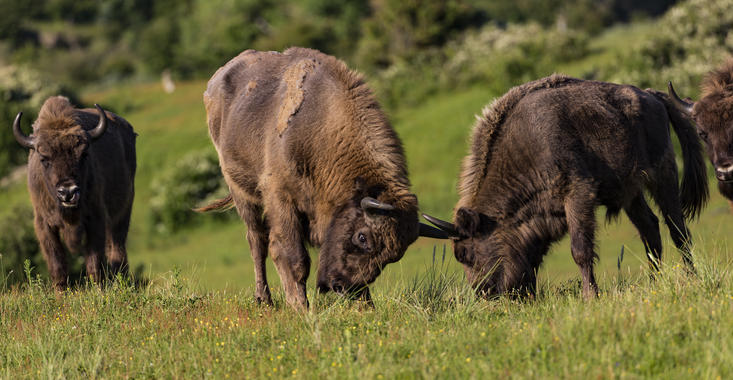 Three wisent bulls from the Kraansvlak herd were transported to other nature reserves in the Netherlands and Czech Republic on Friday last week. They will be replaced by a bull brought in from Czech Republic to add new blood to the Kraansvlak herd. The exchanging of wisent bulls plays in important role in keeping the gene pool healthy and helps ensure the survival of Europe’s largest protected land mammal.

Bulls that are to be transported are herded into a handling enclosure specially designed for wisents by PWN. The best time to relocate wisent bulls is just after the winter before they enter the rut, explains PWN nature expert Esther Rodriguez. The three bulls that are being swapped out have now reached sexual maturity and need to be removed from the herd to prevent inbreeding.

Two of the bulls, a three-year-old and a five-year-old, will invigorate the herd at the Milovice Nature Reserve in Czech Republic. The relocation of the third bull is especially exciting because it will complete the new wisent herd at the Slikken van de Heen nature reserve in the province of Zeeland. Wisents from Lelystad and Maashorst have already been added to the Zeeland herd. The six-year-old bull from Kraansvlak will be the last addition for the time being.

The bulls were originally due to be relocated in April. However, since borders may be closed to prevent the spread of the virus, the wisents were transported earlier than planned. Before they left, the bulls were examined by the vet who supervises the herd to see if the relocation could be accelerated. Kraansvlak nature reserve manager Margot Holland: “We weren’t sure if it would be possible and were relieved and glad to be able to proceed as planned.”