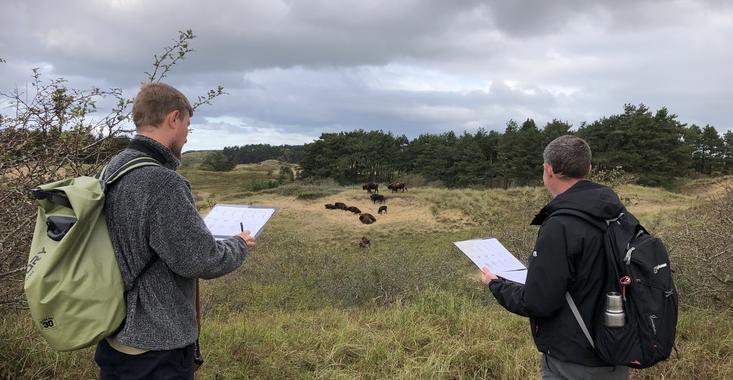 Dutch success inspires the introduction of the European bison in Great Britain.

The European bison, the largest living land mammal in Europe, has grazed nature reserves in several European countries for a number of years. Great Britain is the next to introduce this imposing animal, following The Netherlands, Poland, Germany, Spain, and more countries. Two rangers visited the European bison projects in The Netherlands during an educational visit from the Kent Wildlife Trust.

For three weeks, rangers Thomas Gibbs and Donovan Wright were able to see and experience how the European bison population in The Netherlands is monitored and managed. The starting point was the first Dutch European bison project, at the Kraansvlak in Nationaal Park Zuid-Kennemerland, which is managed by drinking water company and nature manager PWN. Their herd was introduced in 2007 as a research project by PWN, ARK Nature and other partners. It was a risky experiment at the time, since the European bison had been extinct in the wild for approximately a hundred years, and originally lived in dense forests. However, the animal seemed to feel right at home in the dunes, and now spends its days ensuring an open and dynamic landscape. The project also gives us valuable information about the feeding strategies of the European bison, and the effect of the animal on the dunes and its flora and fauna.

Together with a number of PWN rangers and a project manager, the two British rangers followed a daily routine of managing and monitoring the European bison. When asked about their experience, both Thomas and Donovan were excited. Thomas: “Until now we only had second-hand knowledge about the European bison, like video’s and scientific research. That makes it difficult to fully grasp a project like this. That totally changes when you go out into the field with colleagues and see the animals in the wild.” Donovan adds: “Every site we saw here was unique. But what connects them all is the passion, experience, and knowledge of all who were involved. That is what made this trip so amazing, that we were able to make connections that cross borders and that we were able to work on reaching a common goal and vision.” What that common vision is, is clear to both of them: “A wilder Europe.”

The use of large grazing animals such as Highland cattle, Konik horse (a horse breed originally from Poland red.), and the European bison have been well integrated into Dutch nature management. Excessive nitrogen deposition threatens local flora to be overgrown by grasses and shrubs. Native, and often vulnerable, plant species are suffocated and, as a result, a chain reaction of ecological dilapidation is created. Large grazers help keeping the landscape open and in doing so help maintaining the ecological balance. The European bison has a distinguished role in this group of nature’s workers because of the particular way it grazes. European bison generally eat grass, but they also like to eat the bark of trees and shrubs, or snack on leaves and young shoots. They also like to take sand baths, which keep the ground opened up and gives pioneer species a chance to grow.

The main thing that brings the European bison to Great Britain is their grazing habits. There, the animals will be introduced into a nature reserve in county Kent. The area originally features deciduous trees, but needle-leafed trees have been planted in the previous century. This has led to the canopy being so dense that hardly any light gets through to the forest floor. Instead of treating the superfluous trees with heavy and damaging machines, the European bison will thin out the forest naturally. Thomas: “We want to try and let the light in by breaking invasive species, as it is the super fuel for biodiversity. The European bison can play a crucial role in that process, as a sort of eco-engineer who re-establishes natural events. One of the things we hope for is the return of the heath fritillary butterfly. An iconic but rare butterfly that is currently considered threatened in Great Britain. The butterfly’s home plant is the common cow-wheat, a plant that lives in close deciduous forests and spreads it seed with the help of ants.”

The herd in Kent will start small, with four animals, and will have an initial area of 210 hectares. Because the project is in its experimental phase, the area will not be fully open to the public. Thomas: “We hope to slowly build up the contact between the public and the European bison through education, instruction and excursions. You can’t cage these animals if you want to introduce more of these animals in the future, they have to be able to roam free.” Donovan: “This happens in small steps, and as with everything that is new, maybe a little bit of fear. But people are generally positive, they want the best for our forests.”

Thomas: “In many ways this project serves as a blueprint. All the obstacles we tackle now clear the way for future projects, whether it concerns regulations, public opinion, or bureaucratic issues.” Donovan: “It will be like dropping the metaphorical stone in the pond. This project can eventually be the example for the whole of Great Britain, just like the Kraansvlak was for The Netherlands.” 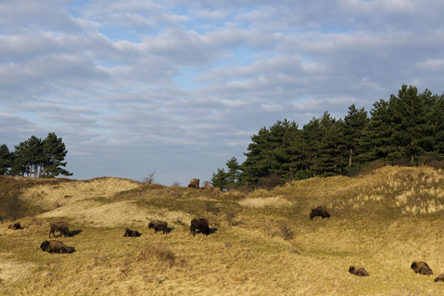 At the end of March, five European bison from the Kraansvlak herd at Zuid-Kennemerland National Park in the Netherlands were exported to Spain. The bison were released at La
read more