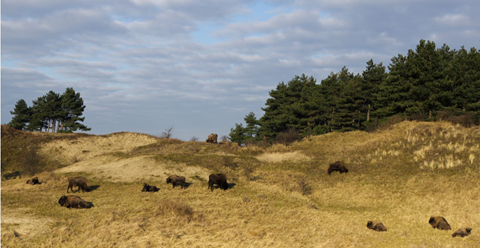 At the end of March, five European bison from the Kraansvlak herd at Zuid-Kennemerland National Park in the Netherlands were exported to Spain. The bison were released at La Serreta reserve in the middle of Spain where there is a bison project. The animals were transported because two of the bulls born at Kraansvlak have now reached sexual maturity and are old enough to reproduce. In their own small herd the risk of inbreeding is too high. At La Serreta they will add genetic diversity to the existing herd. This is especially important when species have a small genetic basis.

The search for a suitable new home

“When searching for a new home for the bison, we look for a reserve that meets our criteria. For example, its is very valuable for the European bison to be released into a natural herd that can reproduce – a herd that consists of mature cows and bulls, calves and yearlings. We also want the animals to be able to behave as naturally as possible in the way they forage for food and interact with the rest of the herd, with minimal human intervention. We also take into account how big the area is and if it is a varied terrain with woodland, grassland, shurbs, and areas where they can take a sand bath,” said PWN ranger Simone de Maat. Fortunately, this time there was a reserve that could provide these conditions. 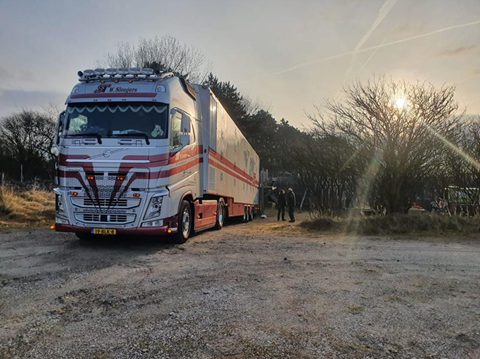 Photo: Early morning arrival of the truck on the day the bison were transported from Kraansvlak

In Spain the two bulls and three young cows from Kraansvlak can graze an area of 600 hectares. The terrain consists of mainly pine woodland and grassland and is richer than their native environment. There were already 22 bison at La Serreta. With the arrival of another five animals, the herd is now quite large. But the richness of the terrain will ensure that the animals have enough to forage on. Fernando Moran of the Spanish branch of the European Bison Conservation Center, who coordinates most of Spain’s bison reserves, describes what happened when the European bison were released in their new environment. “The truck carrying the bison arrived after a 24-hour journey. The first bull, who also took longest to get into the truck, didn’t want to come out. We had to wait patiently for hours until it eventually stepped out of the truck. Luckily, the other four animals were less hesitant. The existing herd was in a different part of the reserve when the new bison were released, but quickly came to check out the new arrivals. We had hoped that the five bison from the Netherlands would have more time to adjust to their new surroundings. Fortunately, the first meeting went very smoothly. It was all very relaxed.” 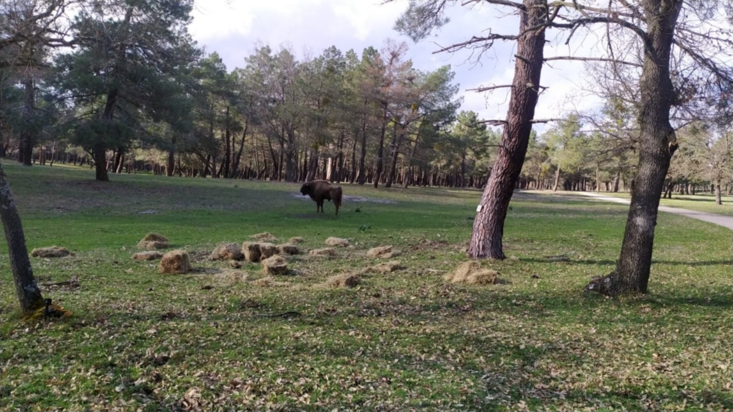 Photo: The first bison bull from Kraansvlak on Spanish soil at the La Serreta reserve 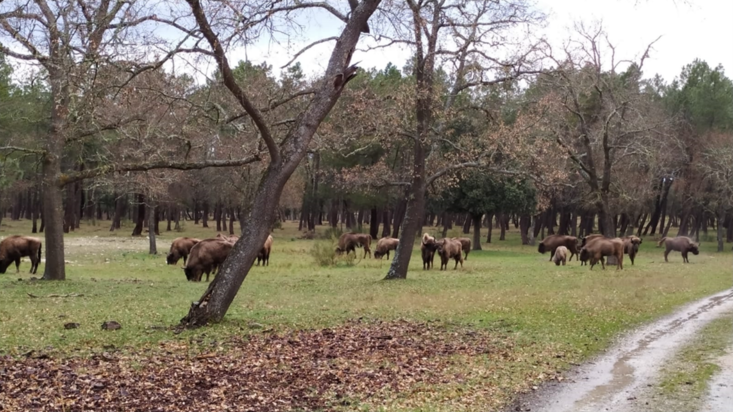 Photo: The bison from Kraansvlak are quickly accepted in the existing herd

Photo: Peace in the herd

In addition to the pine woodland and grassland at La Serreta, there are also areas of grassland sheltered by oak and other deciduous woodland. The reserve has a river running through it, so there are also several hectares of riverbank land with adjacent valley meadows. The European bison live alongside red deer and roe deer. Sometimes wild boar and wolves are seen in the reserve. The animals live on what they can forage. Their diet is not supplemented. Very occasionally, if the winter is particularly harsh, the deer are given supplemental feeding. The European bison occasionally eat some of this hay.

With the departure of five members of the herd, there  are now nine European bison at Kraansvlak: a bull, seven cows and a calf. These animals can now quietly adjust to the new composition of the herd and recover from all the activity involved in the relocation. In managing the bison, we keep human interference to a minimum, but when relocating bison to support genetic diversity and thereby ensure the  survival of the species interference is unavoidable.

The Kraansvlak herd is now poised for the future. With an adult bull from Czech Republic that will sire offspring for many years, a few savvy mature cows who know their way around the dunes, several cows born in 2017 and 2018 that will deliver calves for years to come and a female calf born last year, Kraansvlak now has enough space to accommodate new borns that arrive this year or next year.

Photo: The smaller Kraansvlak herd near Meertje van Burdet lake a few days after the others were transported 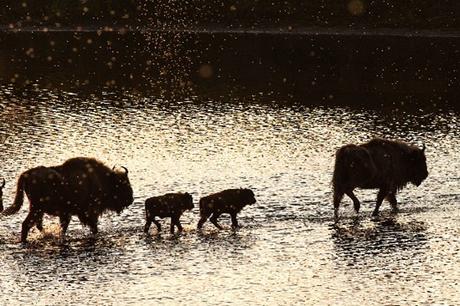 Wednesday 9th November 2022 marks the 10 year anniversary of the first visitors walking the ‘Wisentenpad’ (European bison trail). Of course after it was first officially
read more