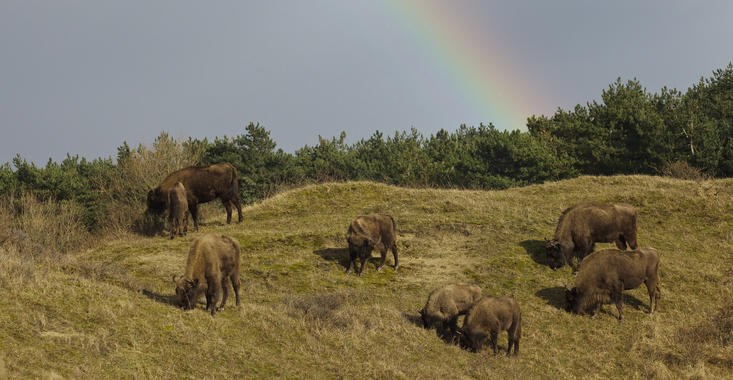 In recent weeks the bison in Kraansvlak have been in the spotlight, both regionally and internationally.

'Tussen Duin en Dijk' is a magazine about research and protection of nature and landscape in the province of North-Holland. In the article 'Wisents do a good job in the dunes' in the December edition, Piet Veel (formerly PWN) and Yvonne Kemp (ARK Nature & PWN), look back to the start of the bison project, the arrival of the first European bison in 2007 and the experiences and research results gained the past years. "So far, the project has provided an enormous amount of valuable data and thus an increasingly clear picture on management and ecology of bison in Dutch nature."

The Dutch bison project has also been mentioned in foreign media.

In the Polish national newspaper 'Gazeta Wyborcza', one of the largest in the country, the article 'Żubr wychodzi z lasu' or 'Bison out of the forest', was published. The familiarity with bison, also known as European bison, in Poland is very high. One of the last populations of wild bison lived in the eastern part of Poland before the species went extinct in the wild approximately a century ago. Poland was one of the leading countries to prevent the species from dying out completely. With much effort and with a small number of animals still living in nature parks and zoos, Poland launched a program to get the bison back into nature. In 1952, it was on Polish territory that bison returned to the wild.

There is, however, still much work to do to get the animal out of the danger zone. Traditionally the prevalent idea is that the bison is primarily an animal of the forest. This is slowly changing and experiences in the dunes of Kraansvlak play an important role. Strengthened by experiences elsewhere and many scientific research, we see the bison thriving in a more semi-open area. The Polish newspaper article addresses this issue and highlights the Kraansvlak as an example. Good news because it means that there may be less forested areas that may qualify in the future for bison and that could let the world population of European bison increase.