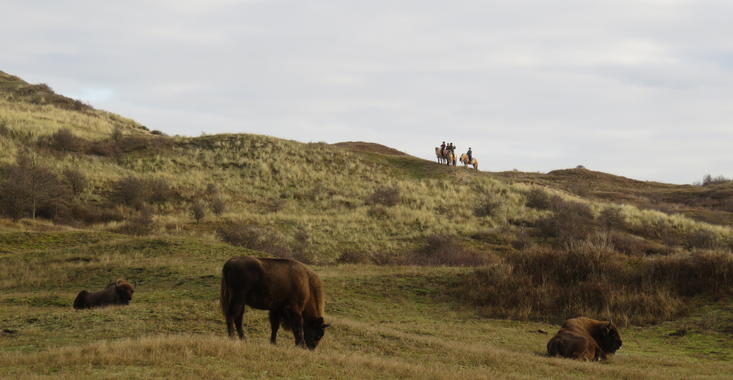 Many visitors Kraansvlak in jubilee year

In 2017 it was ten years ago that the European bison project Kraansvlak started with the arrival of the first animals. Because of this anniversary, special activities were organized such as a Public Day in October when visitors guided by a ranger went to search for the bison in Kraansvlak. In addition, the public has been able to find the bison area well on other occasions.

Since 2009 regular public excursions to the bison in Kraansvlak are offered. Under the enthusiastic guidance of a ranger of PWN a hike to and in the Kraansvlak is made and much information is given about the area and the flora and fauna present. In 2017, 22 of these hikes took place, with various student groups also visiting. More than 260 people became familiar with the project in this way.

In recent years there is also the option to follow a special photography excursion, guided by ranger and nature photographer Ruud Maaskant. Since 2016 the range has been extended with horseback safaris, unique in the Netherlands. In a small group, riders on horseback enter the bison area, accompanied by an experienced rider which is also ranger of PWN. Last year six of these excursions took place, with 22 enthusiastic riders as a result. During one of the horseback rides, Dutch TV program Vroege Vogels visited and the meeting between excursion and the herd of bison was recorded. See https://vroegevogels.bnnvara.nl/nieuws/wisenten-op-de-wandelpaden (in Dutch).

In October there was a special visit for the bison during a national symposium and international congress, devoted to the ten-year Kraansvlak project. The bison were also spotted during the Public Day that followed.

Since 2012 part of the year the Bison Trail has been open to hikers. Thousands of visitors have walked the path in recent years and the bison have regularly been seen. In 2017 more than 5800 visits took place using the path. The path, as every year, closes on 1 March due to the bird breeding season.

For more information about visiting Kraansvlak see here. From 1 March 2018 excursions can be booked here again.