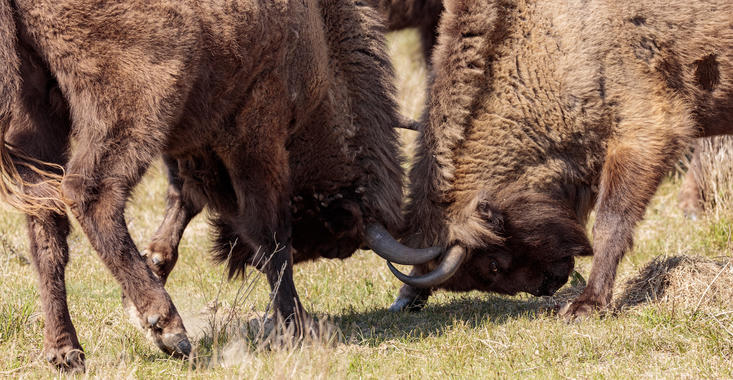 A Czech three year old bull was successfully introduced into the Kraansvlak herd last month. Several bulls were exchanged within Europe in the spring of 2020. The exchanging of European bison bulls plays an important role in keeping the gene pool healthy. It will help ensure the survival of Europe’s largest land mammal.

First encounter
The new bull approached the herd with its tail up in the air, as a sign of distrust. This was followed by an encounter with the oldest bull in the herd. They were rubbing and sniffing each other's scent and pushing each other with their heads to measure forces and determine which of them was dominant. More bisons from the herd then approached for an encounter. The introduction process lasted for approximately thirty minutes. Then the bull started grazing from the fresh dune grass and the special attention for him was soon lost.

Sexual maturity
European bison bulls reach sexual maturity at the age of three or four. Often they leave the herd and join the so-called bull group. As a result of the recent exchanges with the Kraansvlak herd, the new bull currently has no older rivals. Nature expert Esther Rodriguez: ‘We expect him to become the dominant and reproductive bull in the 2021 rut season.’

Herds in the Kraansvlak
The Kraansvlak herd currently has twelve European bisons; three bulls, seven females and two calves. Apart from European bisons, also known as wisents, Konik horses and Scottish Highlanders can also be found in this remarkable piece of nature. PWN deliberately chooses different types of animals, because they all graze and use the terrain in a different way. The horses like to eat grass, while the cattle like to nibble the bushes. European bisons graze less, they peel trees and shrubs and eat leaves and young shoots. In this way, these natural keepers work together to ensure that the dunes do not become overgrown. 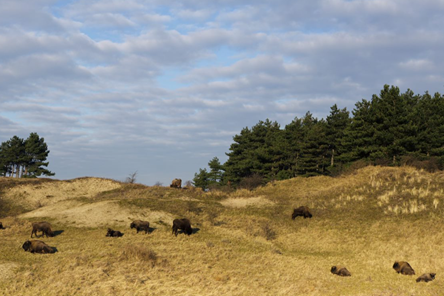